Back to the original shirt project. This is an initial muslin for the Sewaholics Granville shirt. It is a traditional women’s button up shirt with updated fitting. There are underarm darts, and princess seams along the back giving it a more modern and fitted look.

Link to picture and website: HERE  (I’m not affiliated with Sewaholic)

I had the pattern printed and muslin cut previously, and today I put the first muslin together and began adjusting the pattern.

The initial build was fairly uninteresting and so there are not a lot of details here. I’ll include more info when I get to working with better fabric, and when there is more contrast between right / wrong sides.

There were some discrepancies in the collar and collar stand that I could not figure out. I cut the collar stand to size, but when applied to the neckline, the stand was about three inches too long. I doubled checked the stand, and the neck line to see if I had cut the pattern wrong, but couldn’t find any issues. Also, the collar itself is drafted to sit right on the edge of the collar stand at the opening of the shirt. If there are any issues with the collar being off of center back, it protrudes beyond the stand, which does not work.

The first change was to shorten the collar stand. I use a different technique for attaching the 2 stands and collar to the bodice, which allows me greater flexibility in collar stand sizing. (I’ll detail that technique later, its really handy) I chose a generic 1.5 inch reduction, just to get closer too a reasonable length.

I fold the stand in half, to find the halfway point. The patterns aren’t always 100% correct in their markings, so its good to double check. Once, the center is found, split the difference you’d like to adjust onto either side of the center line.

There’s 3/4 inch on either side of center. Fold each new line and then push them together to shorten. Tape will keep everything in place.

I did the same thing to the collar itself, but only by 1/2 inch. Double checking the center point revealed that the pattern printing is off a little, which probably explains why my collar was also off center in the muslin. This may have originated as a mistake when taping the PDF pages together. 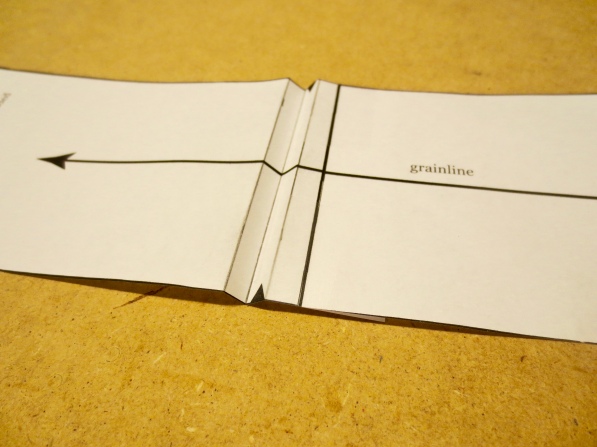 Just to the left of the triangle notch, is where I found the center point to be when folding the collar (marked in pencil, not the best picture). I also double checked my cutting, but it looked right. This is the same process as for the collar stand, only on a smaller scale. There is 1/4 inch on either side of the halfway point, which when put together equals the 1/2 inch I’d like removed from the collar. Hopefully, this gives the collar a little breathing room, instead of being right on the forward edge of the stand.

Here is the finished muslin:

You can see how tight the collar is to the end of the collar stand. Mine is actually over the edge about 1/8″ on one side (probably from the center back notch being off). Everything else is looking good, just need to check fit. I anticipate a full bust adjustment for this pattern, and possibly some re-working of the waist silhouette. I’ll include details on those pattern alterations and how I replaced the original sleeve plackets with a much more user friendly alternative, in a later post.

An odds and ends blog about sewing clothing and outdoor equipment, based in Salt Lake City, Utah. This blog is designed to document, instruct and provide inspiration for the home-sewing of outdoor clothing, equipment, and other non-typical sewing projects.